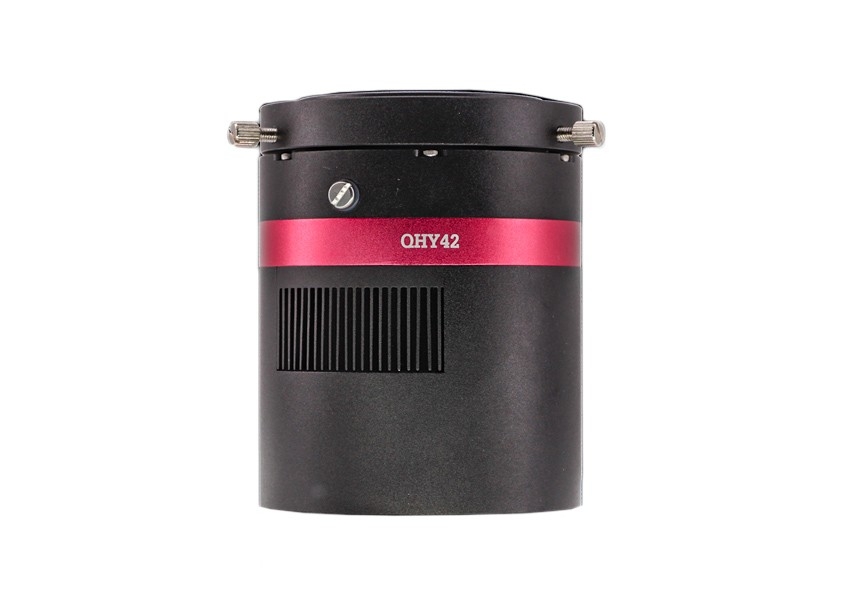 Need help deciding?
Tell us what you're looking for, and we’ll point you in the right direction. Email Us.
Product OverviewSpecifications


Overview
The standard version has 2-stage TE cooling and a USB3.0 interface. The camera has three readout modes: single 12bit high gain channel output, single 12bit low gain channel output. Dual 12bit high gain and low gain output mode. Single channel output is 24FPS at 12-bits. Dual-channel HDR output is 12FPS at 12-bits.
QHY42PRO has the GPS / Trig Signal interface. It can output the precise exposure starting/ending waveform for external measurement. It can also connect with QHYCCD GPS-BOX to measure it. The QHYCCD GPS-BOX will output the timestamp onto the image head of each frame.
Models The QHY42PRO is a cooled scientific CMOS camera with extremely low (1.6e-) read noise. We also offer the QHY42-BSI in a UV enhanced version. The sensor array is 2048 x 2048 with relatively large 11um pixels and 89ke- full well capacity. The QHY42PRO is capable of high frame rates up to 24FPS at full resolution.
For BSI verson, there is three type of the coating of the sensor. TVBIS,UV,VIS. The TVBIS is the most popular type and it has the best QE of 95%. The UV version has a peak QE of 76% on the 275nm. While the TVBIS version has also a high UV QE at 240nm. For UV application. Both TVISB and UV is possible to be use. You can select it according the QE curve. And the TVISB version has lower dark current than UV version. VIS version is not so popular and sometimes the sensor factory does no stock. So if you need the VIS version you need to quote QHYCCD for details.
The first version QHY42 was released in early 2018; QHY has released the enhanced version QHY42PRO. The different of QHY42 and QHY42PRO is that QHY42 only support the single ADC channel output (which called STD mode in the datasheet of Gsense400 , and 24FPS for 8bit/12bit . While the QHY42PRO support both STD mode and the dual channel ADC mode (HDR mode). The dual ADC can work together to sample the same pixels. And output two images. One is high gain and another is low gain. Which can enlarge the dynamic of the output data. The QH42PRO HDR mode will output the 4096*2048 image. Which consist two 2048*2048 image. QHY42PRO also supports the remote FPGA upgrade function via USB port. In future if there is any upgrade of the FPGA code, you can upgrade it directly without send back to factory to upgrade.
Curves
QHY42Pro-FSI